Fascination for a great humanist

The first contact Dardé had with the work of Tolstoy dates from the First World War. While he received treatment at the Saint-Charles hospital in Montpellier, he formed a friendship with a doctor, Bouzansky, deported from Siberia. In April 1917, the doctor sent him a text of Tolstoy “I cannot be silent”, which he translated and accompanied with this dedication “To my dear friend Paul Dardé, M. Bouzansky, April 1917. Read this book, so sad and so human. These forty pages contain almost all of the philosophy and all of the morals of the great Tolstoy.” Following this read, Paul Dardé produced a drawing which shows Tolstoy sat at the foot of a tree. Armand Dayot, director of the Art and Artists review would feature it in a special issue on Russia (2nd quarterly 1917). The sheet is entitled “The last torment of Tolstoy” and dedicated “Your Paul Dardé, stonemason”.

This bust was created in 1927, while Paul and Alice Dardé were living in Larzac in the most extreme poverty. In defiance of his lack of material, Dardé worked, sculpted out in the fields, and extracted blocks of stone himself which he would then sculpt in his workshop. It is this austere stone, a cold and hard limestone, that the artist would choose to sculpt this bust of Tolstoy. The monumentality of the piece, not attributable to its dimensions, resides mostly in the almost brutal execution, without attempting a finish of any kind, as if to better express the strength of the character.

This work belongs to the collection "Sculpting lives". 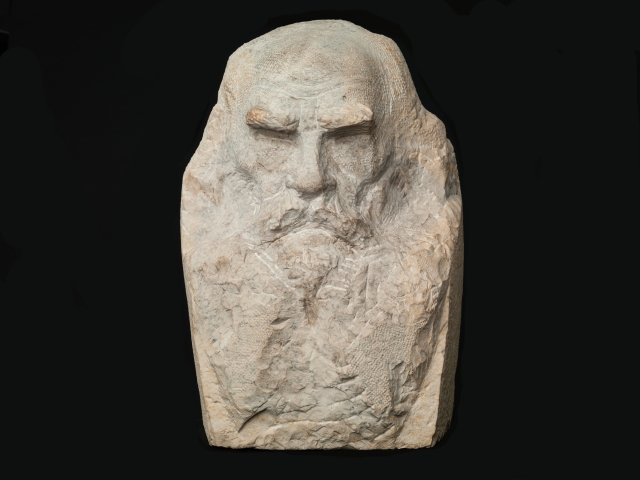 the museum is closed until further notice
permanent exhibitions
Coming exhibition: Eric Bourret. Terres
The European Museum of the Year Award 2020
Video: the great Faun arrives at the museum
back to homepage